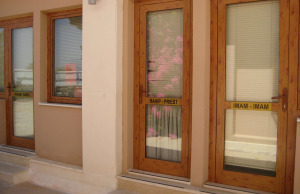 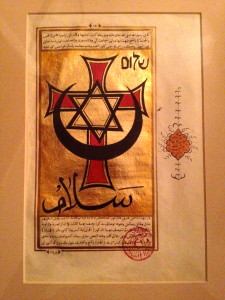 There was a Rabbi, a Priest and an Imam…

…who really do have offices alongside each other in The Garden of Peace at Bezek, Turkey.

At home and abroad — including Turkey, Germany, Israel, and Bosnia Herzegovina — Marcie has participated in and written* about extraordinarily difficult and challenging cultural exchange programs and diversity dialogues that inspire her to help people…
“MAKE SENSE OF CHAOS AND CONFLICT THROUGH CANDID CONVERSATION ABOUT CULTURAL DIFFERENCES.” 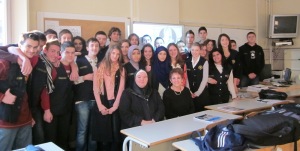 Marcie Lee talks with one group about another, and talks with interfaith and intercultural groups, teaching people how to talk to and about one another with precise words that allow them to:

“ADAM AND EVE AT THE HEART AND IN THE ART OF JUDAISM, CHRISTIANITY, AND ISLAM”
Three very different theologies emerged from Jewish, Christian, and Muslim interpreters of the Hebrew Bible’s text of Adam and Eve in the Garden of Eden and “East of Eden” after their expulsion. Share and delight in discussion of how those theologies are reflected by historical and contemporary artists of these three great religions.

“JUDAISM AND CHRISTIANITY:  DARING TO CROSS THE THEOLOGICAL DIVIDE”
Enumerate and explore differences between Judaism and Christianity. Beginning with their radically different theologies of Adam and Eve’s behavior in the Garden of Eden, understand the departures from Judaism that Christianity fashioned into its New Testament.  Understand why for Jews, what Christians call the Old Testament isn’t old, but ever fresh and forever binding.  Learn why harmony is possible between Jews and Christians despite irreconcilable  religious differences, and how to use language to achieve it.

“AWESOME ARCHITECTURE OF THE CHRISTIAN BIBLE: OLD TESTAMENT BLUEPRINTS FOR THE BIRTH OF JESUS”

“WHY ARE THESE PEOPLE DIFFERENT FROM ALL OTHER PEOPLE: HOW JEWS EXPLAIN FAITH WITHOUT JESUS TO THE CHRISTIANS THEY LOVE”

Christians consider salvation through Jesus Christ the greatest gift they can give. What words might Jews use to decline their gift but retain their friendship? 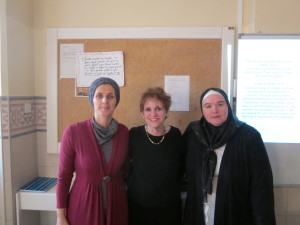 Often reticent to study resurrection because “it’s too Christian,” an exploration of how the powerful phenomenon that emerges from the Hebrew Bible found its way to the centrality of Christianity while remaining critical to Jewish Theology, its original source. An opportunity for Jews to better understand both their own religion and the extraordinary architecture of Christian Bible and Christian Theology.

“STEPPING STONES TO THE COMING OF THE MESSIAH: ASCENDING TWO DIFFERENT STAIRWAYS TO HEAVEN”

“‘THE OLD TESTAMENT’ ISN’T OLD: WHY JEWS SHOULDN’T USE THE TERM AND CHRISTIANS CAN”

“RACISM AGAINST AN ENDANGERED SPECIES:  FACING AND ARTICULATING  WHAT DRIVES THE UNIQUE DOUBLE STANDARD FOR JEWS AND ISRAEL, AND WHY IT THRIVES”

“THE NEW TESTAMENT AS SEQUEL TO THE HEBREW BIBLE”

“Pulling Weeds in A Garden of Peace:  The Surprising Challenges of Intercultural Dialogue in Turkey “

“Home Away from Home: Rebuilding a Ravaged Community After Civil War”

“Marcie Lee is an engaging, funny, and knowledgeable speaker. Her thought provoking presentation to our Catholic adult education class helped each student see interfaith relationships in a whole new way. We thoroughly enjoyed our time with her. It was wonderful to learn important differences in our faiths, how to approach them in respectful ways, and how to love each other “right where we are.” Marcie’s enthusiasm for teaching, her true love for humanity, and her respect for the beliefs of others are apparent in everything she says and does. I can recommend her without reservation as a woman of integrity and insight. Hear her teach: you won’t be left disappointed!”
Kirsten Simonsgaard, Catholic Speaker / Consultant for Fishing Within the Boat